Archive for the category “Ask Yourself New Questions”

Proud to be a potter 🙂  http://www.handthrownbottles.com

Noam Chomsky: With Trump Election, We Are Now Facing Threats to the Survival of the Human Species

NPD A Guide to deal with Narcissistic Personality Disorder.

NPD – A guide to learning to deal with narcissistic personality disorder

Kali Takes America: I’m With Her.

Kali Takes America: I’m With Her.

Posted in #BernieSanders2016, #FeeltheBern, #TheRevolutionIsGlobal, Ask Yourself New Questions, Awareness, Balance, BEST PROGRESSIVES IN USA, Education, Equal Rights, Interdependence, Our Obligation To Tell The Truth, People Who Fight The Good Fight, Permission Slip For You, Planet Earth, Profound Effects, Self Actualization, The Quality Of Courage, There Is Enough, Transformation, Vocation, VOTE, Wake Up America, Wisdom and tagged #AFutureWeCanBelieveIn, #BernieSanders, #BernieSanders2016, #OnlyOneBernie, #TheRevolutionIsGlobal, Education, Education Is Our Future, Education Reform, Elect Progressives, Higher Education, Interdependency, Showing Up, Volunteer, VOTE, Voting, We All Do Better When We All Do Better | Leave a comment

BE PROGRESSIVE! Thanks Liz Warren

(In other words, Hitler was a pretty big fucking loser too, sore sad loser at making art:/  ).

Elizabeth Warren has taken to calling Donald Trump a loser. She pointed out many of his losing ways on Twitter. Cenk Uygur, host of The Young Turks, breaks it down. Tell us what you think in the comment section below.

“In a Twitter rampage on Monday afternoon, Sen. Elizabeth Warren (D-Mass.) enumerated all the ways in which she considers Donald Trump a loser. The liberal favorite launched a barrage of critiques at the Republican presidential candidate, tweeting about everything from the Trump University fiasco to Trump’s numerous corporate bankruptcies. She repeatedly called him a “loser” and concluded, “It’s our job to make sure @realDonaldTrump ends this campaign every bit the loser that he started it.”

Many of history’s worst authoritarians started out as losers – and@realDonaldTrump is a serious threat.

The way I see it, it’s our job to make sure @realDonaldTrumpends this campaign every bit the loser that he started it.”*

Download audio and video of the full two hour show on-demand + the members-only post game show by becoming a member at http://www.tytnetwork.com/join/. Your membership supports the day to day operations and is vital for our continued success and growth.

Thanks ROB BREZSNY for posting, And tx nymag.com for the article, thanks @annfriedman

Whole excerpt of what Rob Brezsny had to say on FB which grabbed me –and I could not agree more :

“Nobody’s saying much about all of the other women running for office right now.

There are currently 27 women in the running for the U.S. Senate, and 216 are vying for U.S. House seats. Plus six women running for governor. Not all of them will win their primaries to make it to the ballot in November. But there are hundreds of women campaigning right now. You’re just not hearing much about them.

The silence is a shame, because in 2016 we could see a record-breaking number of women elected to the Senate. There are nine pro-choice Democratic women running for Senate this year, most of whom have a good shot at election.

Compare that to the supposedly watershed “Year of the Woman” in 1992, which only saw four women senators elected. And, this year, four of the nine contenders are women of color, which is huge because only two women of color have ever, in history, been elected to the Senate.”

When Art Is an Act of Survival

Melissa Broder of So Sad Today finds solace in Ernest Becker’s The Denial of Death and in her own creative process.

By Heart is a series in which authors share and discuss their all-time favorite passages in literature. See entries from Karl Ove Knausgaard, Jonathan Franzen, Amy Tan, Khaled Hosseini, Franz Kafka and more 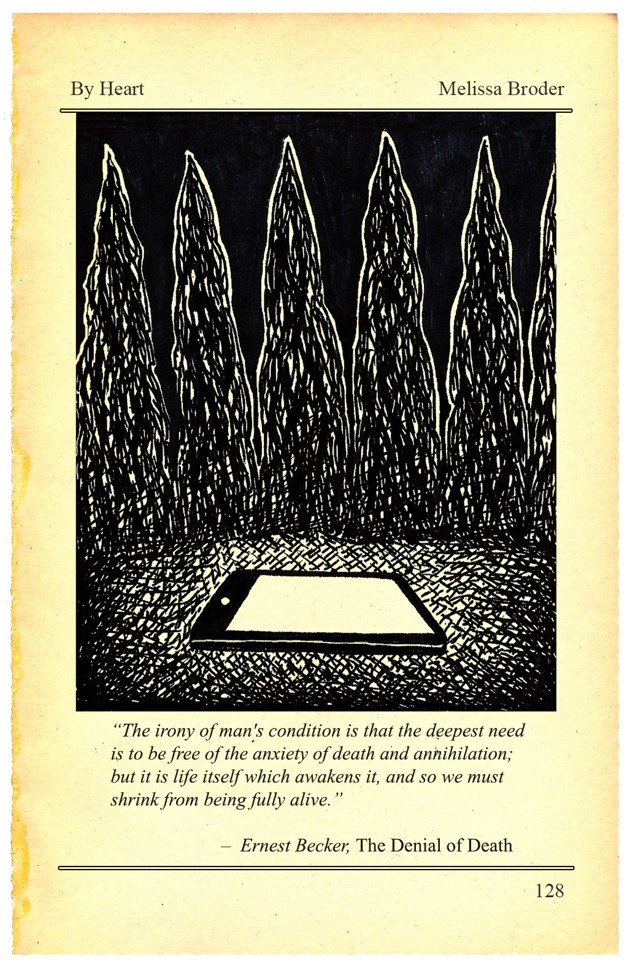